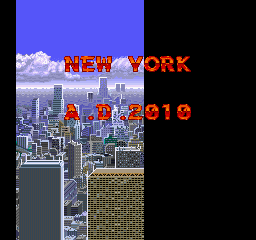 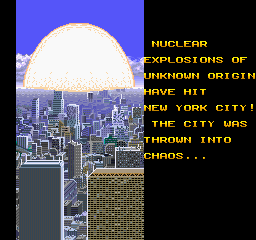 In the distant future of 2010, New York is rocked by ‘nuclear explosions of unknown origin’.

20 years later, the clean-up operation has barely begun when a mutant gang full of mean dudes, calling themselves ‘Big Valley’ (I can’t read that name without immediately substituting early 90s cheese-reggae outfit Big Mountain, who rose to brief prominence with their cover of ‘Baby I Love Your Way’ – and I’m sure you’ll agree a dystopia ruled over by such a group would be equally chilling/chillin’) take over the ruins. Oh fudge! What will you do, US Government? Send in some troops to restore order, right? 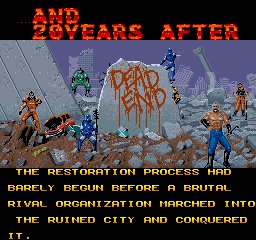 Wrongo. For reasons unknown the US Government want to keep their efforts to save New York City a secret. Wouldn’t want it getting out that they cared about the lives of citizens on sovereign territory! To this end, they hire the ‘Crude Busters’, two big dudes with CND jackets and dyed hair, to go in and consecutively punch every member of the band Big Mountain sorry, of the gang Big Valley in the face, starting with the lowliest minion and working their way slowly up to the tiny moustachioed professor at the helm.

Crude Busters is often touted as the spiritual sequel to Bad Dudes Vs DragonNinja, and yeah, all right, I can see that. Certainly it performs the same job of reflecting America’s cultural anxieties back at it via the distorted mirror of Japanese observer bias. Whereas Bad Dudes Vs DragonNinja embodied fears of an invasion of Japanese culture and the flashing, intimidating technology appearing in every US household (personified, naturally, by hordes of ninjas), Crude Busters is one of a whole slew of hand-wringing parables about the crack epidemic. 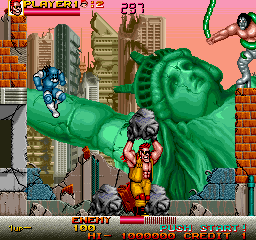 It’s another Vigilante-style fantasy, only now, you’re explicitly working for the man, entering no-go areas to tackle a variety of terrifying freaks and geeks, intent on restoring order. For the first half, it’s a pretty fun game, too. Most of the scenery can be picked up and flung – you can even hurl your enemies – and much of what can’t be appropriated as a weapon can be smashed. The mutant bad guys make for some creative mid- and end-level bosses, from an armoured mollusc to a blue midget Santa. 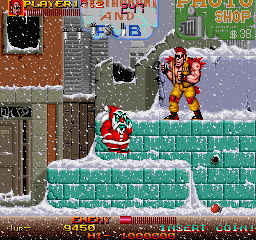 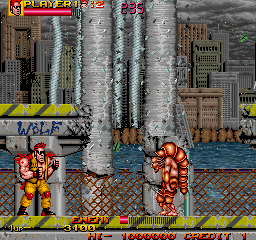 This is one of the first beat em ups we’ve looked at released in the 90s, and the advances in technology really show. Animated backgrounds show the river torn apart by tornados, huge trees bending in a gale, snow, and a panoramic view of New York (including the Twin Towers, rather optimistically depicted as having survived a nuclear blast) as you rise on an elevator towards the final boss. 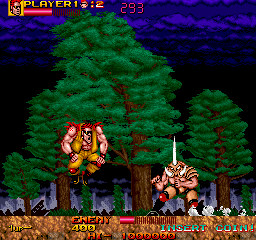 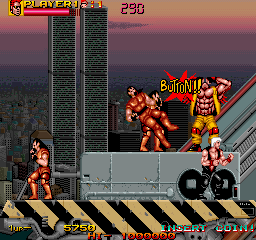 Towards the end of the game, enjoyability wanes as bad guys grow increasingly cheap with their special moves, and levels descend into a lengthy, plodding boss rush. I realise revisiting bosses from previous levels is a staple of the genre, so it feels a little churlish to gripe about it, but Crude Busters takes the practice to extremes, make you fight three of the same boss simultaneously, again and again, over the last two levels. It’s not fun – it’s a fucking grind, and it detracts from the well-balanced and fun rough-and-tumble action of earlier stages.

And this, more or less, is the swansong of the genre, as far as 2D sidescrollers are concerned. After Crude Busters, side-scrolling beat em ups became 3D almost exclusively. You can feel the limitations on later levels, where the sheer number of enemies clutter the limited playing field. Weapons are heaped everywhere – it really feels like they’ve squeezed in as much as the format can take. 2D sidescrollers continued to thrive as platformers and run-and-guns, of course, but as far as beat em ups were concerned, 1991 was more or less the year when the genre breathed its last. 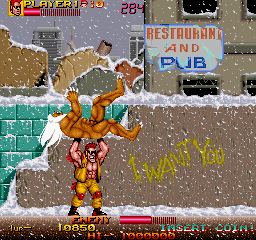 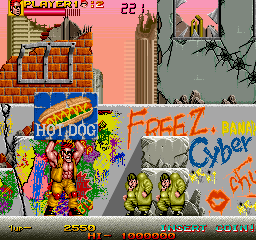 I love the weird graffiti here. I may compile a post of graffiti in retro video games. 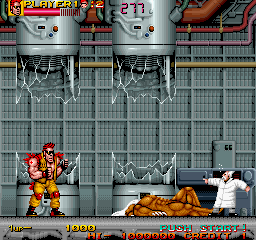 Next week, I want to look at one last 2D sidescroller that, if I’m honest, I’d forgotten about – which is crazy, because it’s one of my favourite beat em ups ever. And it scares the shit out of me.

Hope you enjoyed this! Be sure to check out previous posts in my history of beat em ups. Also let me know what you think of the format change this week – are screenshots better than a single gameplay video?