Hovering at the fringes of the beat em up genre is the slash em up – a (usually Conan-flavoured) romp through pseudo-medieval Fantasyland, slaying goblins, kobolds (I’m normally pretty good when it comes to bestiaries but if anyone can tell me the difference between a goblin and a kobold I’d be mighty obliged), bandits, corrupted knights, trolls, ogres, daemons, and various Dark Lords/Insane Mages/Foul Princes Risen From The Stygian Gloom.

I include them in our trudge through the Democratic Republic of Beat Em Up because the differences are mostly cosmetic. Sure, your character will be packing a sword, axe, or – if they’re feeling particularly fruity – perhaps a staff or mace, but for the most part, the mechanics of walking left-to-right, tapping an attack button to hit grunts as they come into range, then pummelling an end-of-level boss until his energy bar is empty, pass intact between the two sub-species. Most beat em ups let you dish out punishment with knifes, axes, baseball bats, and even guns and grenades from time-to-time, so the distinction is very much one of mood. 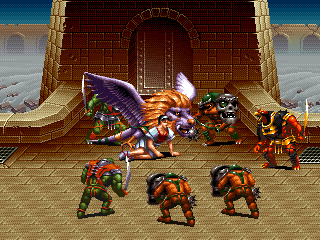 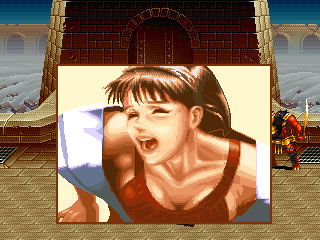 The creme de menthe of slash em ups is generally considered to be Golden Axe. This is mainly a ubiquity thing (I mean, come on, be honest, how many slash em ups have you actually played? If you have to count them on more than one hand, then by the genre’s standards, you’re an expert) and I returned to the title with a bit of a bee in my bonnet, only to discover that it remains a surprisingly playable, well-balanced little number.

Every time someone told me they loved Golden Axe, I smiled and nodded and silently judged the shit out of them. But I had been wrong. 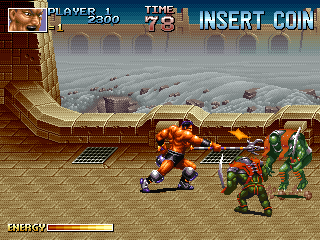 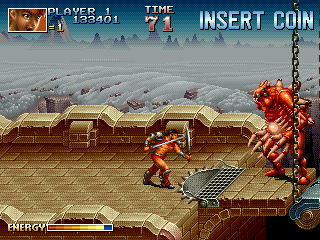 Thus chastened, I approached Irem’s Blade Master full of hope. Clearly inspired by the Sega classic but running on meatier hardware, this colourful monster-slaying epic had every chance of being a corker.

Yeah. You’re way ahead of me. 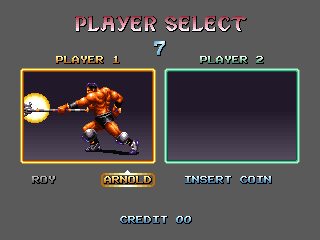 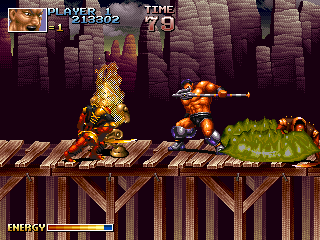 In Blade Master, you may play as Roy or Arnold, tanned, scantily-clad heroes fighting to drive the monsters from their kingdom and rescue, I don’t know, a crying lady or something. Presumably the feudal system deems her strategically important and the dark legions have exploited this. Arnold is a beefy pikeman, while Roy packs double-scimitars. Nothing suggests an ancient kingdom wreathed in myth and magic quite like ‘Arnold and Roy’, does it? And by ‘an ancient kingdom wreathed in myth and magic’ I mean ‘two short order chefs from the Bronx’. 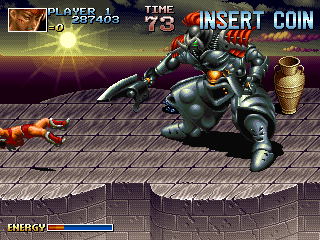 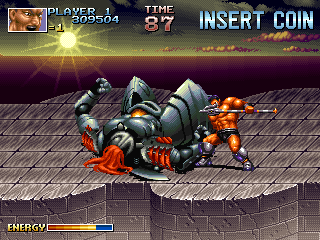 Imagine a procession of carnival floats. A fetid stench wafts with the parade. On every flatbed lorry, decked in bunting, are open jars filled to the brim with excrement. You gag, covering your mouth with a scarf, and back away through the cheering crowd. To your horror you see that everyone is wearing pinbadges made from actual lumps of shit – little brown pretzels coated in epoxy resin to maintain their shape. You stumble down an alley and emerge onto a village green. The air thrums with bluebottles. Dozens of gaily-decorated stalls sell human faeces heaped in cones, pasties filled with hot mule diarrhoea, elaborate funfair games where steaming jobbies drip from red-and-white painted targets or explode in a stinking mess when shot with cork guns. ‘Why?’ you gasp, and the taste carpets your tongue.

That is nothing, compared to the turd-fest that is this game. 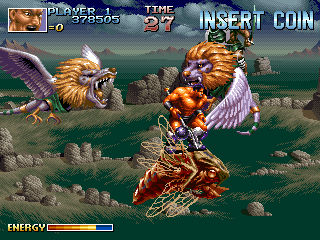 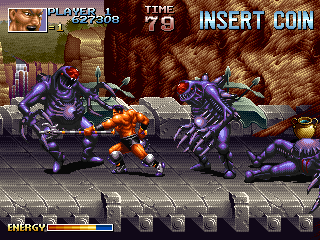 Blade Master takes a plethora of thrilling elements and renders them joyless, irritating and workmanlike. Roy and Arnold have, perhaps, three moves in their repetoire. They handle like elderly, truculent butlers responding to the luncheon bell. As with Karate Blazers, the philosophy of the game’s creators seems to have been ‘if fighting one steam-powered golem is fun, then fighting twenty simultaneously will be 100% FUNGASM’.

Now I don’t accept the protasis from which this apodosis is drawn, but even if the game’s fighting mechanics were limber and crunchy and if any of the grunts you fight did feel solid and exciting and unique, flooding the screen with dozens of them – and not even doing us the mild courtesy of palette-swapping some, to create the barest illusion of diversity – just means your creaking avatar rapidly gets outnumbered and starts hitting the canvas more often than Bob Ross in the aggressive, delusional phase of a three-week crystal meth binge. 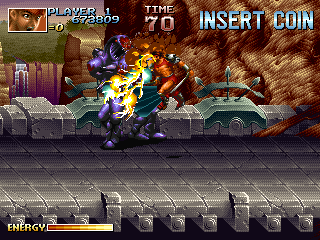 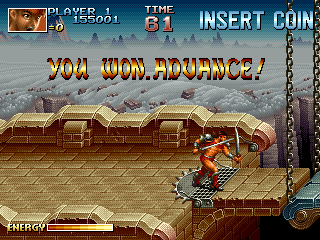 Everything about Blade Master is slapdash and insulting. It’s almost as bad as the abundantly fucking criminal Double Dragon 3 – certainly the slash em up genre’s shameful equivalent.

We still have so far to go in our tour through 3D side-scrolling beat em ups, even before we wheel round and get to grips with PvP fighters like Streetfighter II and Tekken. We will meet dragons along the way. Not all of you will make it.

But take heart, dear companions. For every Blade Master, there will be a Golden Axe: The Revenge Of Death Adder or a Knights Of The Round. For every Karate Blazers, there will be a Punisher, or a Captain Commando. Slowly, we are becoming experts in this most niche of genres.

Now sing us a lay of times long gone, something to stir the blood and warm the embers of the soul. For the road is dark and the night closes in around us, and Golden Axe III is really, really shit. Let us ride.

You can read the rest of my history of beat em ups here.