A ‘dude’ used to be a sort of metropolitan dandy, but the word underwent some totally badass semantic drift and, during the 80s and 90s, generally referred to any guy who was really, really cool. Now it just means ‘a bloke’. That’s the price you pay when you gamble with semantics, my friend. Make a word so awesome that everyone wants to use it, and you run the risk of it widening into meaningless blah.

At my school, a rumour – passed in whispers with a suitable gravitas to convey authority – held that ‘dude’ actually meant a camel’s willy. It doesn’t. So, you know – if you’re still clinging to that cheeky chestnut, maybe now’s the time to let go.

All of which is a circumlocutionary way of wheeling round to face one of the great behemoths of my childhood, a touchstone of toughness and cool, Data East’s sidescrolling beat em up Bad Dudes Vs DragonNinja.

You must know the opening to this game. You remember it, right? 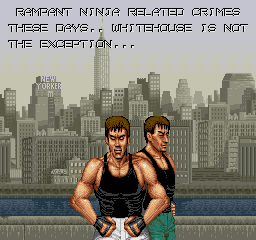 ‘President Ronnie’ has been captured by ninjas, and the US Government’s response is to ask two muscle-vested guys, Blade and Striker, if they are ‘bad enough dudes’ to rescue him. Fortunately, this strategy works, because the titular DragonNinja clan have no idea how to use a hostage’s safety as leverage in a negotiation. Indeed, it’s unclear what they hoped to gain from kidnapping the President in the first place. I suppose they are just driven to nefarious acts by their inveterate diabolical whimsy.

Most of the stages are composed of a higher and lower platform, which you can jump between, while punching and kicking your way through scads of nasty ninja hordes. The most common enemy are blue ninjas, who die with a single hit, but there are also grey ninjas, who attack with ninja stars, caltrops and smoke grenades, red ninjas, who drop power-ups like nunchuks, daggers and energy-restoring cola cans, ladies in black fishnets and hairbands (???), and occasionally chaps with katanas.

It’s funny how integral sound effects can be to a successful gaming experience – in the case of Bad Dudes Vs DragonNinja, the satisfyingly solid ‘crack’ noise your punches and kicks make when they connect really help to make you feel like you’re properly walloping some mooks. You can even charge up a flame-punch, which can take out multiple opponents at once. BOOM!

The bosses are mostly good fun (check out the end of the video for the boss rush at the end of the game – I’ve included the whole thing, so you can see me do an actually adequate job of fighting powered-down versions of all the end-of-level baddies) and include fire-breathing Russian muscle man Karnov, from, uh… Karnov. 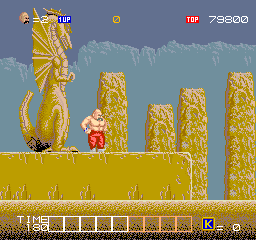 Karnov is a brutally-hard and mostly forgotten platformer about a legendary dude who can spit fire. He’s as fragile as a poppadom, however, which makes for a singularly unrewarding gaming experience, as you keel over and expire at the flimsiest provocation.

Weird sidenote: Bad Dudes Vs DragonNinja is unusual for the era in its portrayal of dogs that you can beat up. Most games released in the US at the time find odd ways around depicting violence against animals – the rule seems to be that you can punch or shoot a dog, but not kill it. So, in Narc and Shadow Dancer, when a dog gets shot, instead of collapsing, it shrinks and runs away, whimpering. In Vendetta, defeated dogs howl and vanish. Meanwhile, human bodies are dropping to the tarmac left, right and centre. It’s a peculiar convention, but Bad Dudes Vs DragonNinja roundly ignores it. You punch a dog, it froths at the gob and expires. End of. Maybe the retaliation by censors hadn’t happened by 1988? A better scholar would find that out and tell you. Ah well. You’re stuck with me.

So, what’s it like to play? It’s… well, it’s okay. The early levels are fun and feel well-balanced, right up to the green ninja boss in the sewer who can make copies of himself. After that, it all starts to feel a bit samey. The forest and cave levels in particular feel like filler. A sense of plodding resignation isn’t the best mood for beating up ninjas.

Already you can feel the limitations of dual-plane, sidescrolling action. Games like Shinobi and Rolling Thunder made a reasonable fist of keeping things lively, what with their focus on shooting over close combat, but the writing was on the wall. Yes, 1991 saw the release of ‘spiritual sequel’ Crude Busters, which uses the same format, but with the release of Final Fight in 1989 the writing was on the wall for sidescrollers, whether they had platforms or not.

Next week, I want to look at one of the weirdest, most original instances of the 2D sidescrolling beat em up genre. I want to, and I will! If you want to read more entries in my exhaustive and completely unsolicited history of beat em ups, click here.