So it’s been a week since we finished our tour of poets’ graves and I’m still letting all my thoughts percolate before I start producing new material inspired by it. Next week I’m going to be doing two gigs in London where I talk a bit about the trip, and hopefully perform one or two new poems, if I can write them and they don’t suck.

During our pilgrimage around poets’ graves, one regular discussion we had in the car was ‘which poet has the best grave’ and ‘what type of memorial would you like’? 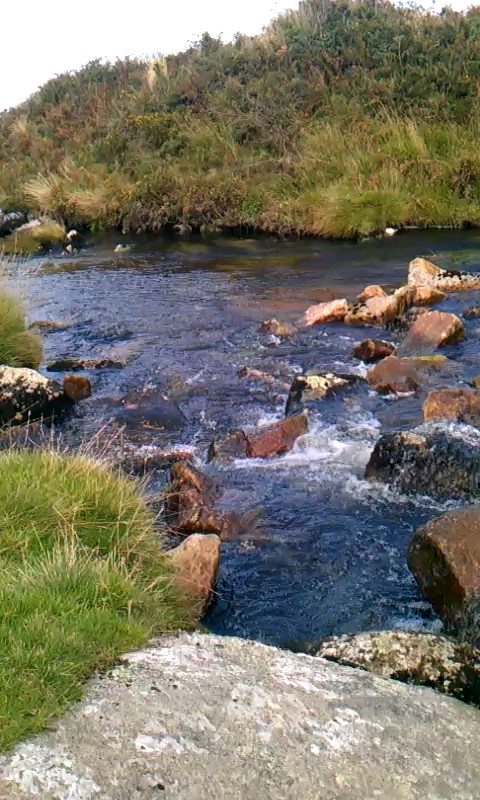 This is the River Taw on Dartmoor, beside and into which Ted Hughes’ ashes were scattered. His memorial stone is nearby, its exact location if not a closely-guarded secret, then certainly not publicised – ‘to prevent its becoming a shrine’ as one person had it, which is mental. I think that’s what a memorial or grave is supposed to be, actually. People visit it and remember the person.

If you get cremated, your ashes get mixed up with the ashes of other people and miscellaneous detritus and a lot of you goes out the chimney or sticks to the sides in a sticky black goo. At my grandmother’s funeral, as we filed out, I noticed that there was pale dust all over the carpet, tracked out of a backroom, with footprints in it.

So the scattering of ashes is only symbolic, even if you believe that the remenants of someone’s body have any sort of resonance. Some grey granules representing you – some of which may have even been you (or yes, yes, still are you – lets not lose ourselves in a derail about Cartesean dualism and flawed mind-body paradigms) – will be flung in a place of your choosing.

I wouldn’t mind this, only the scene where James Bond nearly gets cremated alive by Mr Wint and Mr Kidd and also the scene in Scrooged where Bill Murray nearly gets cremated alive have made me a bit afeared of cremation. Also, more pertinently, I can’t think of where I’d like to be scattered or buried. I guess I love being alive and don’t want to admit that one day I won’t be. Or maybe this just isn’t the option for me. 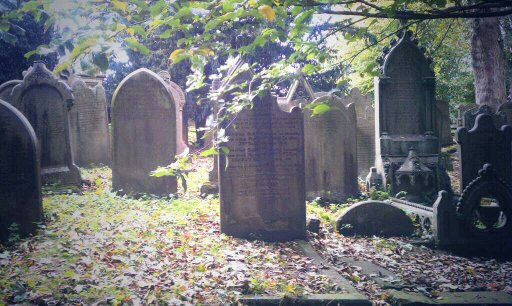 When we went to visit the Brontë sisters’ family vault, the graveyards surrounding it were badass. Super-spooky, atmopsheric, all stonework and lichen and looming oaks. We had a bit of a moment, Mark, Mixy and I, when we read some of the inscriptions and realised that a lot of the graves were for children. Certainly dozens of people buried in the surrounding graveyard had been under 18. Life is so perilous and short for so many people, and all I could think was ‘thank flip that’s not me’.

Getting buried amongst such grim splendour does feel attractive, but even if you’ve got big hitters like the Brontës nearby, pulling in the restoration dollars so your resting place receives some rudimentary TLC and maintenance, the individual graves get tatty very quickly. Exposed to the wind and rain, frozen under snow then baked by the sun, wrapped in ivy and with thick taproots pushing through the earth beneath them, big, close-packed headstones like these have got a couple of centuries in them at best before they collapse. In so many places, the inscriptions had been worn to nothing by the passage of years.

If your gravestone stands upright, there’s a very real danger of it toppling and breaking in two. Also, the windward side tends to get pummeled with rain and wears down rapidly. On the other hand, gravestones built into the ground get trodden on, and a relatively small amount of foot traffic does the damage of decades of wind and rain. We visited graveyards where the entire ground was paved with gravestones. The estimated number of bodies buried in the picture below? 60,000. Ugh. 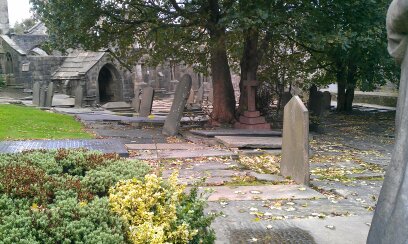 So by all means rest in an atmospheric, photogenic graveyard. Just don’t expect anyone to be able to find you after 200 years or so. As one of the poets performing with us in Hull pointed out, most graveyards last a maximum of 300 years then get built over. So they’re not even permanent in and of themselves. 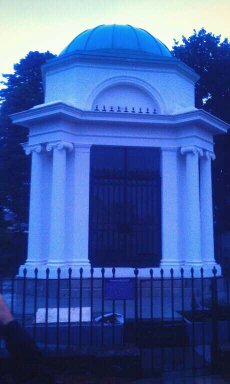 I guess a masoleum is like a super-grave. A beefed-up, elements-proof fortress against the ages. We visited Robert Burns’ masoleum in Dumfries and it was great. Inside there’s a big dramatic sculpture of Burns, a farmer inspired by the heavens, and down there just beneath the plough (it’s rather blurred in my shot) is a wee mousie, which I thought was really cool. 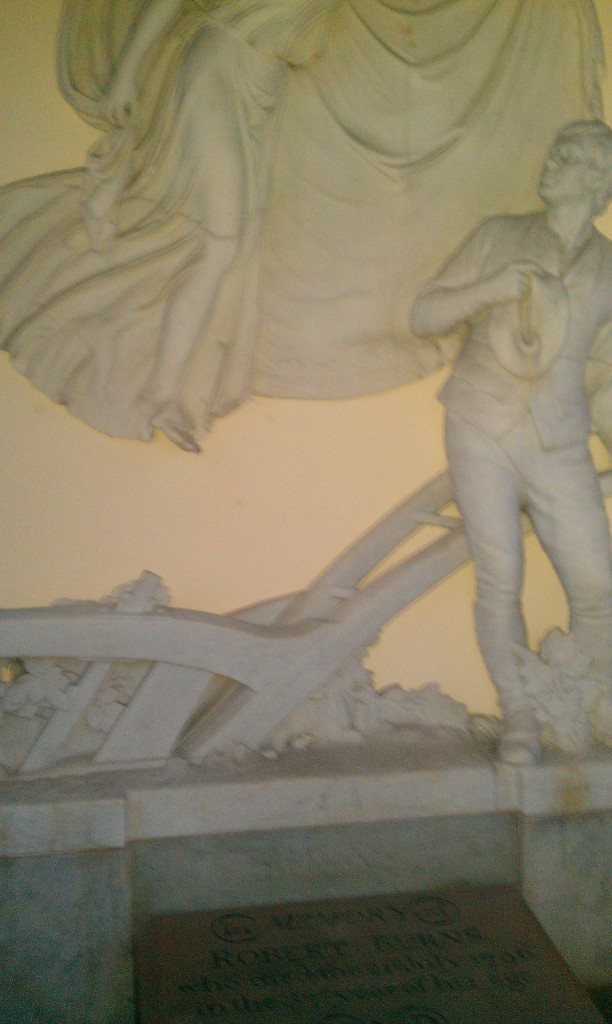 Within this masoleum, Burns’ memorial stone is protected from the wind and the rain and the snow and the relentless tramp of the boots of the living. Which is a pretty sweet set up, on the face of it. The only downside is that he wasn’t buried in the masoleum originally, but moved there after his death, when people decided that a simple grave was not enough. During transit, his head fell off. They used the head to make a cast of his skull, but still. At least if you’re cremated you’re spared the indignity of being decapitated years later. 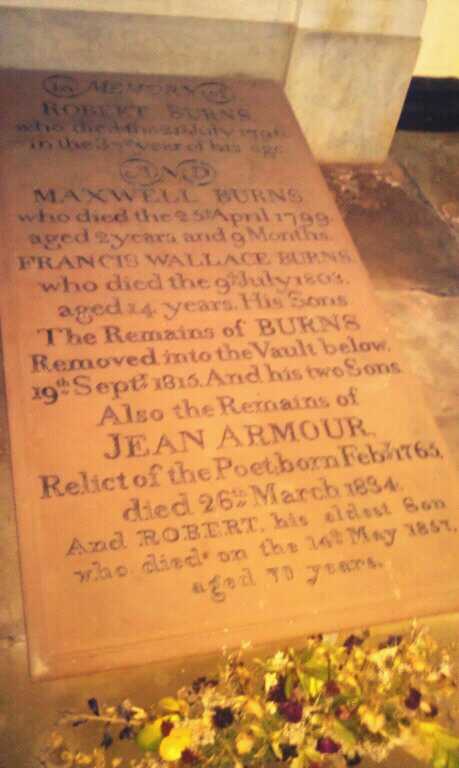 Option 4: Have Your Legacy Weirdly Appropriated By A Chain Pub 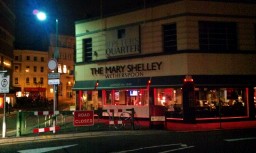 In Bournemouth, opposite the graveyard in which PB Shelley and Mary Shelley lie, is ‘The Mary Shelley’ Wetherspoon pub. Which is either really funny or really sad.

Option 5: Don’t Worry About It Mate – Human Consciousness Doesn’t Survive Death So It Literally Does Not Matter, Just Love Your Friends And Family Now And Take Your Joys Greedily While You Are Still Alive And Therefore Capable Of Experiencing Joy