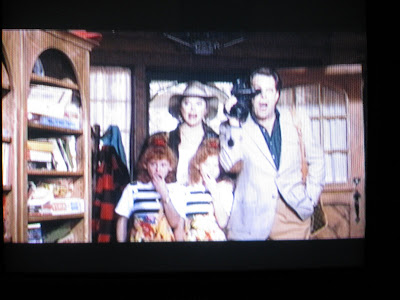 You know how, a few days after a celebrity death, you always get this surge in not terribly sophisticated jokes about their passing? My friend Tom once announced, several years after her death, that he had made up a Princess Diana joke.

This developed as a meme, to the extent that, for the past 5 years, the first I have heard of almost every celebrity death has been my phone buzzing, and a text from either Tom or my friend Joe, that simply reads: ‘Knock knock’. The phrase has taken on a terrifying odium that makes my chest tighten whenever I read it. Thus I awoke at 7:09am inside my tent on Friday at Glastonbury, to two texts reading: ‘Knock knock’. Actually, Joe’s read ‘Knock knock’, Tom’s was: ‘Don’t blame it on the sunshine / Don’t blame it on the moonlight / Don’t blame it on the good times / Blame it on the knock knock’. I could barely bring myself to reply: ‘Who’s there?’ because Tom’s text suggested the unthinkable answer. It’s horrible knowing that somebody has died, but not who. When I was told ‘Michael Jackson’, I was really spun out, but I knew it was true, because for all their levity, Tom and Joe have never ever lied in any of the dozens of ‘Knock knock’ texts they’ve sent me. There’s a certain unspoken code to them, something almost, y’know… sacred.

The thing that really got to me was realising that, some day, who knows how soon, I’m going to receive one of those texts from Tom or Joe, and I’m going to reply, ‘Who’s there?’, and the answer will come buzzing back through the ether… ‘Dan Ackroyd’.

One Day, It Will Be Ackroyd

I find out in a flurry
Of poorly thought-out movie allusions
They carry the news like pall-bearers
‘Busted, mate’
‘Bustin’ makes him feel bad’
‘He really is a ghost now’
Tom, a veteran at text obituaries, says:
‘Apparently they found him with a phone in his hand.
Who was he gonna call?’
But Joe weighs in late with:
‘My mother-in-law is a little… high strung’
Which, though irrelevant,
Is the only Driving Miss Daisy reference,
Meaning he wins.