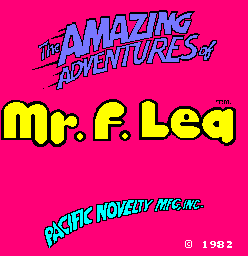 The Amazing Adventures Of Mr F. Lea can’t blame its title on some over-enthusiastic foreign programmer’s bad English – unlike most of the other games I’ve covered in this hall of shame, it’s just a really crap pun. Appropriate really, since the entire game is basically a succession of weak jokes, as gentle and poorly-executed as the vicar’s ‘funny’ cartoons in the fortnightly church newsletter. 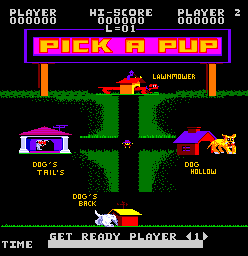 As the eponymous Mr F. Lea, you must face four dog-themed levels in whatever order you choose. Unlikely though his name may sound, when I worked selling car insurance over the phone, my manager was a Mr D. Olphin, so shit names do exist in the real world. D. Olphin wasn’t a dolphin though, at least as far as I’m aware – I never saw him in person, and to be fair everyone who worked at Norwich Union had tiny, expressionless eyes and talked in a string of chirrups and clicks.

Each of the quartet of levels is essentially nicked from a more successful game, given a doggie makeover then made shit. It’s like watching a version of The Matrix where all the cast are alsatians filmed on someone’s Nokia. Whilst having one of your toes amputated. 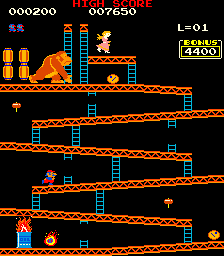 ‘Dog Hollow’ is a joyless rip-off of the first level of Donkey Kong. 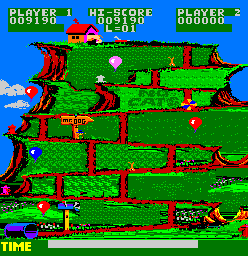 Instead of fireballs, giant gorillas and daredevil leaps across girders, the rear end of a dog kicks bones and what look like beach balls down a florid morass of blocky gibberish. Collect balloons on the way, if you can be arsed. 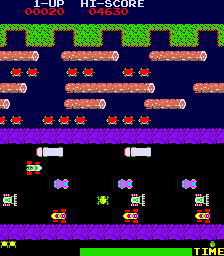 ‘Lawnmower’ latches onto Frogger‘s glistening calf and humps the living Christmas out of it. 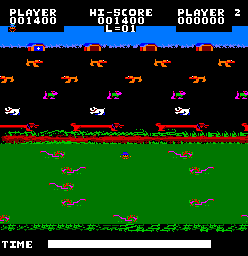 Instead of a road and a river, you must first guide Mr F. Lea across a lawn, avoiding the mowers, then help him leap over a series of dogs’ backs (the sausage dogs are the easiest to hitch a lift on, for the obvious reason) to reach some tiny, nondescript hangars (for a less obvious reason). Collision detection is crappy, and Mr F. Lea moves in a succession of decrepit jerks, yet it’s still insultingly easy – an achievement almost impressive in its dreadfulness.

The other two stages, ‘Dog’s Back’ and the irritatingly-apostrophed ‘Dog’s Tail’s’, plagiarise levels from Taito’s 1982 platformer Jungle King, a game which had its own dubious history of theft, after Taito got sued by Edgar Rice Burroughs’ estate for its unauthorised use of the Tarzan character (including a sample of his trademark yell), and, sadly, a game which was total shite. 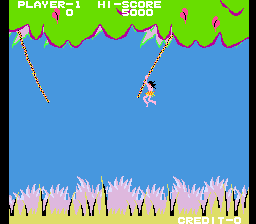 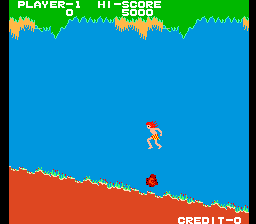 ‘Borrowing’ liberally from the vine swing and uphill boulder-dodging levels, the final two stages see Mr F. Lea swinging across a succession of apparently delighted pooches’ tails, (a level which is so easy I’ve literally never managed to die on it – I don’t even know if you can) and running up a dog’s back, dodging the spots, which for some reason seem to have become lethal to fleas. 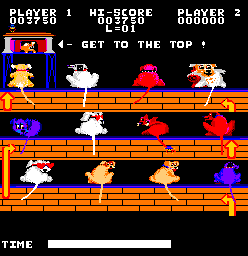 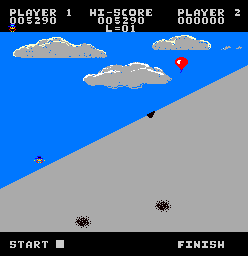 In fairness, Jungle King was bollocks to begin with, so TAAOMFL can’t really be said to have hugely besmirched the lineage by producing similarly tedious, workmanlike plod-a-thons, but when they’re such obvious toss, why steal them in the first place? It’s like building a sex-robot then giving it the face of Gaby Roslin.

Also, why did they filch two crappy levels from Jungle King, yet not touch the section that sees you swimming through a river, repeatedly stabbing crocodiles in the face? 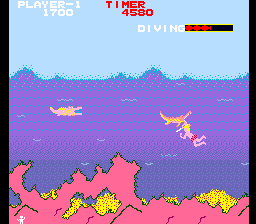 Regular readers of this blog know only too well what a fan I am of games where you get to stab crocodiles in the face. It’s an unsung genre, and one that TAAOMFL would have done well to mimic. Instead of all that knifey-carving-supple-flesh-gnnnh-I-love-spoiling-you-bitch harmless fun, we get a stupid flea jumping up and down on a dog’s big smiling head. Fuck you, Mr Lea. I bet D. Olphin would have stabbed a croc. He would have stabbed a croc right in the visage and liked it. 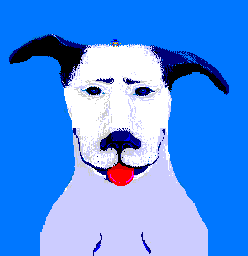