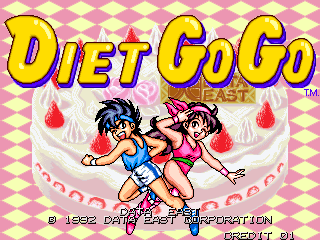 Diet Go Go belongs to that rare class of video game, the ‘issue’ title. The Oddworld series – Abe’s Oddysee, Abe’s Exoddus, Munch’s Oddysee, etc – all foreground an ecological/animal welfare message, Cannon Fodder claimed to be anti-war, although how many players actually picked that up, and to what extent pleading ‘satire’ provided a convenient defence for the prodigious, unremitting violence is up for debate, uhh… Mick & Mack in McDonaldland advocated eating at McDonald’s?

At first glance, Diet Go Go appears to be a game with the laudable premise of encouraging exercise and healthy eating. From the somewhat sparse cut scenes, it appears that a cyborg mad professor is intent on turning our planet into a world of fatties by pelting everyone with food. Clad in leotards, sweatbands and legwarmers, our two heroes set out to battle the professor’s mischievous scran-dispensing minions and restore Earth’s people to their former shapely glory.

Except – this shit is really fucked up. Touching any food whatsoever turns you into a slow-moving, miserable bloater, and touching a second item whilst fat instantly kills you. You don’t even pop in a cartoonish way – your character moans and keels over, apparently from cardiac arrest. It’s super-unpleasant, and particularly twisted given that most of the foodstuffs are somewhere between harmless and very healthy – bits of sushi and even tossed green-leaf salads flicker with a skull and crossbones showing that to eat them is to condemn yourself to life as a worthless sweaty chuffer.

Worse still, you can’t work the weight off by running around or eating healthily – the ‘diet’ the game purports to promote in fact consists solely of bottles of diet pills, which, if collected, return you to your original shape. I mean, I can see why the Japanese felt the need to create this game, what with their country’s long history of chronic obesity problems, but for fuck’s sake, it’s horrendous. Don’t get me wrong, I’m not some humourless knee-jerk offence-finder – I thought the furore over Fat Princess many months back was ludicrous hand-wringing that trivialised a very serious issue and showed a worrying lack of judgement by advocacy groups apparently more interested in shrill, petty controversialism and column inches than credibility.

Fat Princess featured weight gain and loss incidentally as part of its game mechanics – Diet Go Go is actually attempting to promote an ideology, yet its take on the subject is a confused, cackhanded mess.

For the most part, the game’s a remix of Tumble Pop, a cutesy platformer where two bandana-clad heroes suck enemies up into vacuum cleaners then fire them out at other foes, working to clean up the globe then eventually confronting the alien menace in space. Diet Go Go borrows several power-ups and baddie sprites, then adds its own rubbish twist on the game mechanics, essentially taking a reasonably yummy chocolate cake then glazing it with some Korsakoff’s-addled boozehound’s pungent arse Bovril.

Instead of sucking foes into a vacuum cleaner, you fling what look like little balls at them, causing them to get fat and float towards the ceiling. Bumping into fat enemies makes them go pinging around the screen, crashing into their cohorts, who get destroyed in the process. Their trajectories are pretty much random, largely removing the element of skill from the whole game. Brilliant.

At the end of each level, you face a big boss character. Initially they look quite exciting, until you realise each one follows an identical pattern, spazzing about dropping little bad guys which you need to fatten up then knock back into the big boss. That’s it. Every time. Man it fucking sucks. 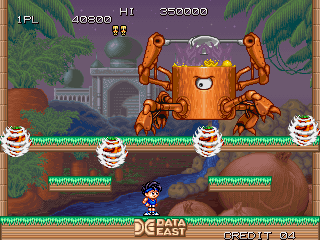 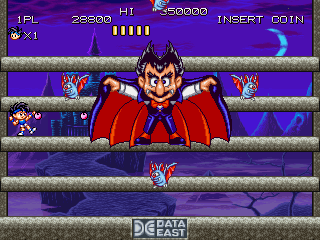 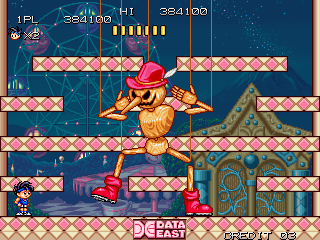 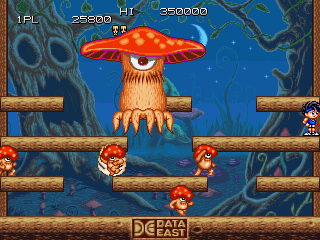 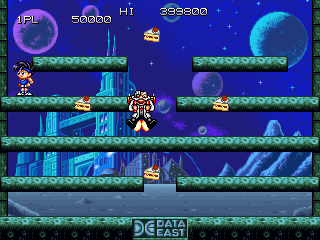 Eventually you confront the professor, hit him with a ball, and he duly explodes. Game over. I actually played all the way through this game just to write this review. Agghh.

Diet Go Go is abysmal. If you want kids to improve their health, it seems somewhat shortsighted to do so through a medium that encourages long periods of inactivity. However, Diet Go Go is so aggressively unentertaining that I can only imagine it drove thousands of Japanese youths staggering from the video arcades, blinking into the sunlight, emphasising as it does just what an intellectually bankrupt, wretched waste
of our temporary sentience video games are. I feel miserable and dirty, and I’m not sure if I’ll fully enjoy gaming again.

Complete a world, and you’re ‘rewarded’ with a titilating/hilarious pic of the two central characters struggling with their weight or flaunting their unrealistic bodies. Actually I do fancy the girl a bit. Gnnngh. Do you see? This is what this steaming aggregation of colon slurry has done to me. It took my innocence. IT TOOK MY EYES! 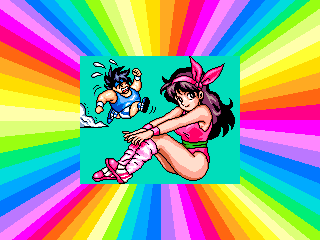 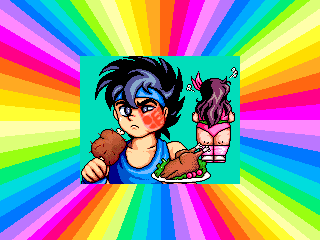 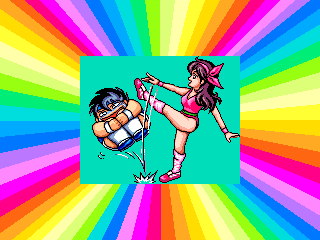 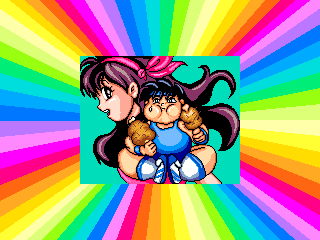