Hello and welcome to Death Of 1000 Cuts – making you an awesome writer, one cut at a time.

Yes yes, it’s another week out of The Barber’s Chair while I push the second novel to project status and hammer away at the keyboard in a dismal spectacle of obstinancy triumphing over craft. I will write, I will write, I will, and no blaring klaxons and red wash in the cockpit of my critical faculties are going to persuade me otherwise. Words are shuffling onto the page like queer proto-sentient translucencies coagulating on the shore after a storm. Whether they eventually evolve into an intergalactic saurian empire or wash away with the next rush of spume remains to be seen.

Hey – if you want to submit your work for In The Barber’s Chair or you have a question you would like me to tackle in a mailbag, please check out our Submission Guidelines and email me using the ‘Contact Me’ link on the right.

This is a big week for me, because the proofs of The Honours have finally gone to press. For the first time, my novel is becoming an actual, y’know, book! I haven’t received a physical copy yet, but since the cover images are up on Amazon I thought I might as well show you what it looks like: 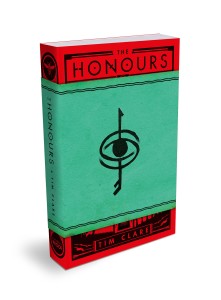 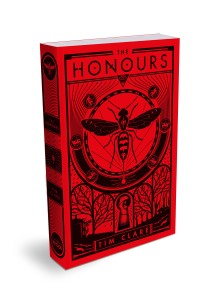 If you click on the images you can see full-size versions. As you can see, The Honours comes with Elegant Party Attire in the guise of a verdigris-coloured cummerbund. This is to mask the energies of the powerful occult seal inscribed into every book which, left unshrouded, has the ability to instantly blow open all 7 of your chakras, plus the little-known 8th or ‘tentacle’ chakra, while upgrading your Chaos Emeralds to Super Chaos Emeralds and downgrading your Wanted rating to zero stars. Already the miracles attributed to this unassuming little tome are causing clerical nightmares at the Vatican. I cannot speak to the veracity of any of these wondrous events, and neither can I guarantee that, if you leave this book face-up, uncummerbunded, in a shaft of moonlight, the Great Earl Räum will not rise from the seal upon the cover, bow his sleek corvine head and swear fealty to you, his new and everlasting master or mistress.

But I can guarantee that if you preorder the book here or here, you will be supporting the career of a new author who has worked his entire life for this moment. And that is well worth jeopardising your – let’s face it, probably non-existent – immortal soul for, as well as a smidge over ten pounds sterling.

Every writer sooner or later, is going to have a brainfart.

If you’ve worked at your craft and you keep up a healthy reading habit and you’re looking after yourself so you’re not constantly nursing hangovers or reeling from sleep deprivation or haggard with stress then you’ll have some good moments at the keyboard. Rarely, the words for what you want to say will come first time, and the sense and the sound and the way they sit with the sentences beside them will all perfectly marry. It’s like pooing and only needing one wipe.

More often, you’ll kind of know what you need to say next and you’ll have a run at it and your critical eye will recognise that no, that’s not quite right, you’ll delete, you’ll have a second attempt, you’ll read it to yourself… ah, but now there’s a lot of ugly grammatical cartilage at the end of the line, so you switch a few words around. Is it clear enough? You add an adjective, shake your head, replace it with a different one. That doesn’t feel right either so you look it up on Thesaurus.com. None of the options are what you’re looking for, and in the end you delete the adjective and trust the noun to carry the semantic weight and you reread the line and… meh, you’re still not 100% sure but it’s good enough for now and you move on.

And sometimes, you’ll write the thing, and rewrite the thing, and rewrite it, and shuffle it about, and rephrase… and still it isn’t right. You know something has to go here, but your protagonist has unaccountably started talking in the elevated register of High Fantasy feudal lord, or every metaphor you try to close this paragraph with dies on its benighted arse like that café on the corner that keeps reopening under new management then failing in the first six months. The blocking doesn’t work (how do you describe someone shining a Pink Lady on their steward’s tabard?) or you can’t think of a dialogue beat except ‘she frowned’ or ‘he rolled his eyes’ or your description of the autumn park is one of the most anodyne and cliché-strewn ever to be committed to text.

It is a resolutely Crap Bit. And it won’t let you move on until you’ve fixed it.

So look, the conventional wisdom, the sort of thing blasé bluff old authors toss out while smoking lugubriously and opining on craft, is that when you struggle with a sentence, a paragraph, a scene or a part thereof, the resistance you feel is some marrow-deep artist’s Spidersense warning you that you are making a mistake. You can’t find an elegant way to phrase this because the scene itself is inauthentic, or merely redundant. The dialogue sounds wooden because you are making the characters say things untrue to the uncanny psychological facsimiles of them you store in your mind. The metaphor is dying because that paragraph just don’t need a metaphor.

So, they continue, looking dour through a gauze of yellow fag smoke, you must stop, and listen to this inner voice, and wait until you understand it, then make the necessary changes before pressing on.

And listen, Mr Imagined Lugubrious Strawman Author, I don’t disagree with your central premise – this idea that a sudden, vertiginous dip in craft is usually a symptom of some structural flaw that is resonating out into the style. That, if you’ve dutifully written yourself an outline in which, on p265, the elderly retired mackerel canner who is slowly losing his independence unsheathes a concealed katana from his walking stick and begins lashing at hordes of viscid, lamprey-mawed xenomorphs pouring from the air ducts – without any setup whatsoever – you may find that the spare prose which has served you so well up until this point suddenly refuses to function.

But I don’t agree you should stop.

Particularly with small fuck-ups and relatively minor dissatisfactions in the narrative, downing tools and pondering the significance of your sudden inadequacy is only likely to result in a piecemeal, stop-start workflow and bugger all actual writing taking place. Doubt and low mood can easily simulate the workings of a keen critical eye, convincing you to abandon or delete or delay work when the best medicine is just to thunder on.

It’s all very well pissing about with the nuances of style and voice – some authors claim they can’t go on until they’ve got the language just so, that the voice is the plot, in some strange way – but if you’re any sort of editor you know that great chunks of the novel are likely to die in a bloodthirsty cull when you come to redraft. You could waste days and weeks noodling with the word order of a paragraph you end up humanely destroying. A little tinkering along the way is, I think, healthy – it helps sharpen your narrative eye and forces you to really picture a scene and listen to your sentences in your head – but from time to time, you’re going to have brainfarts.

Frankly, if you don’t, either you’re some genetic freak who produces perfect prose first time or, more likely, you lack the ability/desire to critically appraise your own work. Just highlight the text in yellow, or add a little marginal note to yourself, then move on. Come back to it with fresh eyes and an unfuddled head when it’s time to redraft. More often than not, the solution is obvious. Sometimes, you devote an hour or two into working out a solution – but because this moment now has a context, a clear before and after, it’s easier to focus on what’s needed.

Occasionally, you realise the whole scene is redundant and, with the beneficient sigh of a dying angel, you delete the entire wretched thing. That shit is glorious, kids, I’m telling you. Killing a bad scene feels like pooing out an evil ghost that has been haunting you for years. But you can only exorcise it with certainty if you can see the big picture.

That’s the lesson. Paint up your mistakes. Move on. Fix it in post.